Leeds neighbourhoods can apply to close streets for Playday 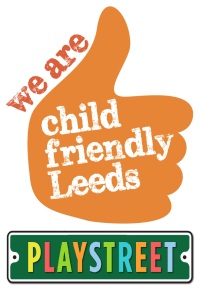 Residents across Leeds are being invited to apply to close their streets on 5 August and participate in national Playday.  As well as a celebration of children’s right to play, Playday is a campaign that highlights the importance of play in children’s lives.

National Playday takes place every year on the first Wednesday of August. The day is celebrated right across the country, with thousands of children and their families getting out to play at hundreds of community events.  As part of the celebrations, neighbourhoods in Leeds will be able to close their street for an agreed time period, and revert back to a time when children could play safely outside their homes and gardens without the worry of traffic.

This year is the first national Playday since Leeds City Council launched ‘Play Streets’, an initiative that allows residents to close their streets temporarily so that local children can play outside freely and safely.  Residents can apply for street closures through the Play Streets initiative.  Further information and application forms can be found on the council’s website.  The deadline for applications for groups wanting their street closure to coincide with national Playday is 24 June.

Residents and communities considering interested in closing their street can also get free support, advice and guidance from Leeds Play Network, a charity responsible for organising street play sessions across the city.

When we launched our campaign to make Leeds a child friendly city, one of the things young people told us they wanted was safe places to play. This is a great example of Leeds putting children and young people’s wishes into action.

I’m sure our city’s youngsters will welcome the opportunity to play in their streets on national Playday and it’s fantastic to see initiatives like Play Streets being set up in Leeds.

I think it is wonderful to close the streets so that children are able to play safely and interact with their friends, just like my manifesto suggested.  Leeds is a fabulous city and making it safer for children to grow and play outside is also an opportunity for them to build new friendships and stay healthy. I love the idea.

As part of Play Streets residents can apply to close their streets any time of the year.