Local school girl Tunmann Dev (aged 7) presents the findings of the First News newspaper ‘State of Britain’s Children’ survey to a room full of powerful people including the media at the House of Commons. 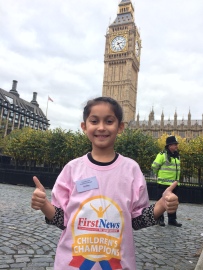 During the summer holidays Tunmann, who is a pupil at Moor Allerton Hall Primary School in north Leeds auditioned via a video film submission to become a ‘Children’s Champion’ for First News Newspaper (The only national weekly newspaper for young people) and speak on behalf of Britain’s children. Tunmann had to audition by making a short video film explaining why she would be a great representative of First News newspaper and what her passions are.

Tunmann is a budding scientist and artist. Most likely found at the Oakwood Farmers Market helping the REAP Gardening Group or litter-picking at Allerton Grange Fields with her dad. Tunmann has a great passion for the environment. After school, Tunmann enjoys gardening, singing, dancing, playing the piano and swimming.

The editors at First News were so impressed by the video submission that they invited Tunmann to become a First News Children’s Champion. Tunmann’s role at First News will be to raise the voices of children in Britain. Tunmann will also on occasions be invited by First News to speak to the media and give her opinions on today’s issues and current affairs.

Tunmann delivered the findings on how children relate to their families and friends during the press conference where the panellists announced the results of the First News survey of over 2,000 children aged 7 to 14 across the Britain about everything they do in their lives.

The ‘State of Britain’s Children’ readership survey was conducted by First News with insight agency Opinion Matters and covers a range of topics affecting the lives of children including emotional well-being, physical appearance, parents, school, technology, love and the world. The results of this research, which will be published in First News newspaper in the coming weeks, will hopefully help to shape future government policy and programmes.

This was a wonderful opportunity for Tunmann to publicly speak in The Palace of Westminster and was a great experience for her at such a young age and will hopefully inspire other children and young people in north Leeds. Tunmann was the only panellist from the north of England (and the youngest of all eight panellists). She is a great representative for Moor Allerton Hall Primary School and Leeds.

Tunmann will be sharing her experiences of being a First News Children’s Champion with teachers and pupils at Moor Allerton Hall Primary School after the half term holidays.