Leeds streets with the highest proportion of road accidents were the first to receive the new, lower speed limits. As the work continues on the roll-out of 20 mph speed limits, some communities will see a much more comprehensive treatment of their local area, where higher speeds are only permitted on roads that are classed as primary routes and not in the surrounding residential streets.

Middleton and Belle Isle is the first large residential area of Leeds to have such comprehensive provision of 20 mph speed limits. The change will be signalled by the provision of signage accompanied by drawings prepared by the children from the Middleton Primary School.

Playground sessions will involve scooter training and bike balance to boost active travel and reaction time to bolster road safety awareness when crossing the road. An HGV will be parked in the school car park and the children will have a chance to sit in the cab to help them understand the driver’s view of the road and the space around the vehicle.

The local policing team will be supporting the children and the staff from Leeds City Council Influencing Travel Behaviour Team in a Mini Speedwatch initiative, with the children using a Smiley SID (Speed Indicating Device) at the roadside in locations near the school. The visible presence of the children with the SID along with the new speed limit signs and promotional banners with children’s designs and photos will hopefully act as a reminder to drivers that a new speed limit is in place to better accommodate the needs of the local children and their community.

Here, Middleton Primary School talk about their recollections of the launch day itself…

Last week, new signs went up in the streets adjacent to Middleton Park Avenue as the first visible step of extending the 20 mph speed limits to all residential streets of Middleton and Belle Isle except for the area’s arterial roads. The new initiative was launched at the Middleton Primary School on Thursday 28th January.
The day began with the school assembly. The children were asked whether they have noticed anything new on the journey to school (they did – the new signs and banners – some even recognised themselves in the pictures) and quizzed about what the new speed limit meant for them. ‘If the car is going slowly and they hit you, you may be OK, or not badly hurt’ – is one of the responses. ‘It is better for when you walk or cycle’, ‘There is smoke coming out of the cars, and if you walk, or cycle, there is no smoke’.

The authors of the winning new sign designs were presented with their prizes by Cllr Groves and Cllr Truswell.
Road safety messages featured strongly during the assembly and no wonder, as the new speed limits are introduced in a bid to reduce accidents. For example, in areas of Middleton and Belle Isle where 20 mph speed limits have been in place for at least five years, the number of traffic casualties went down by 49 in five years, from 88 to 39. This meant 12 fewer people killed or seriously injured. The statistics are particularly encouraging for child casualties – in the five years after the speed limit changed from 30 to 20 mph, these went down from 29 to 13.
In order to help children travel to school safely, Cycle Leeds provided Balance Bikes session for Year 1 pupils while Years 2-4 honed their scooting skills; the older children scooting in the playground and in the 20 mph streets around the school.

“Why is there a great big lorry parked in the school car park?” asks the deputy head teacher Penni Bullock. “It’s because Miss has a new car!” somebody volunteers an answer. It turns out to be wrong. The DHL are there to help make children more aware of the risks around large vehicles, such as the blind spots in the drivers view from the cab. A group of children stand by the vehicle while one of them clambers into the cab. The kids then walk away from the truck and their friend in the cab is supposed to sound the horn when he can see them. It takes quite a few steps. They try shouting to see if he can hear them when they are behind the lorry. They yell on top of their lungs and still no horn sounds. The DHL staff then demonstrate why it is never a good idea to go under a lorry to retrieve a football. “How much is this worth?” one of them asks holding an orange ball. “About a pound” one child suggests. “About a pound” muses the driver. “And how much are you worth?” They haggle over the price, ranging between £20 and £70. “I think you are all priceless” the driver finally declares. “Right then, let’s see what happens when we start the lorry”. With the pupils safely behind a line of tape, the driver starts the lorry which immediately goes over a large milk bottle filled with water. Squeals and laughter erupt as the kids get sprayed, but a moment of more serious reflection comes when they examine the perfectly flat, fused plastic of the bottle retrieved from under the wheel.

In the meantime, part of the class is taking the Reaction Timer. A Leeds City Council van has been turned into a simulator, to be virtually ‘driven’ at 20 mph and 30 mph. The children get a chance to test how fast they can hit the brakes and how far the vehicle would travel before stopping. For some of them, the van would take over 30m to stop. “That’s well past the last cone” the staff help them visualise. “If you stepped out in front of that car would it have stopped?” They all agree that it wouldn’t.

They also all agree that not all drivers are good drivers. They have a chance to talk to an officer from an off road policing unit about enforcement, ask questions and clamber onto the police motorbike.

Year 3 and 5 pupils go out with the Road Safety trainers to help the local PCSO on speed watch duty. A portable SID (Speed Indicating Device) is set up on a 20 mph street and the children are acting as safety rangers, noting the type of passing vehicle, its speed, whether seatbelts are worn and whether the driver is distracted in any way. While no roadside enforcement takes place, the number plates of those that are driving dangerously are recorded to be checked against the Police/ DVLA statistics. Those that are driving at the maximum speed of 20 mph are greeted with a smiley face.

At the end of the day of activities the children were given some leaflets to take home, showing the map of the local area with the new 20 mph speed limits and opportunities for active travel, including cycle routes, and a diary of local activities taking place on different days of the week. They also took home other goodies designed to help them stay safe on the road while travelling to school and promote the new lower speed limits: reflective arm bands, badges and stickers, and in car air fresheners for their adults to remind them to drive at 20 mph.
My thanks go out to the ward members who took an active part in the Assembly and the activities that followed, to the staff from the Influencing Travel Behaviour Team, to the local Police and DHL staff who enabled this brilliant day to happen, and to Middleton Primary School for hosting it. 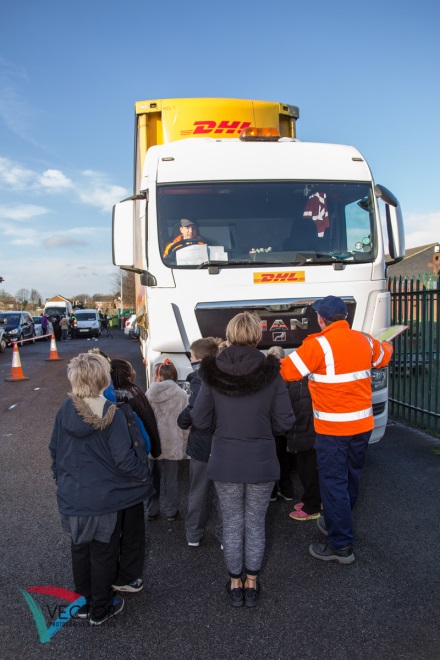