What are the Child Friendly Leeds Awards?

The CFL Awards showcase the amazing things that children, young people, adults, schools, communities, businesses and organisations are doing to make Leeds a better city for children and young people. This year we have eight award categories (a new one seems to get added every year) and these are:

The nomination window closed at the end of October and we received 573 nominations for children, young people, youth groups, volunteers in schools, adults (including youth group leaders, teaching assistants, teachers, nurses, and physiotherapists), community groups, arts organisations, public places and venues, cafes, restaurants, sports centres, religious places of worship and many more. This year we received the largest number of nominations ever – so a BIG thank you to everyone who made a nomination.

Who organises the CFL Awards?

The CFL Awards are organised by a different group of young people every year who are attend secondary schools or colleges in Leeds. This year there are 13 of us and one of our first jobs was to decide on a theme for the Awards and a name for ourselves. We decided on the theme of comic super heroes and wanted our name to link to this and so we’re called The Dynamics! The group is made up of young people aged 12 to 17 years old (I’m the oldest!) and come from ten different schools and colleges from across Leeds. 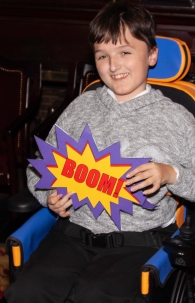 How do The Dynamics organise the CFL Awards?

We started to meet once a week after school for an hour and a half from mid-September and we’ll continue to meet until February 2019 when the CFL Awards are held. Each week we take part in a variety of activities based on our particular interests – we’re all very creative young people and have lots of ideas! We tend to arrive, have a group chat and catch up with each other, play a game to get our creativity moving and then we split into three groups based on our interests. The three groups are:

Each week we have different visitors come into talk to us about an area that we need to know about and understand in order to plan a great awards ceremony. So far we have been visited by:

Kelly and Anna who work on Comms and Marketing for the City Varieties and Leeds Grand Theatre. They came and talked about their job roles and told us about important things like: publicity; how to gather an audience for the many shows that they put on; the importance of social media; press releases and how to get newspaper coverage of our event; the media: newspapers, television and radio; and about targeted marketing e-mails. 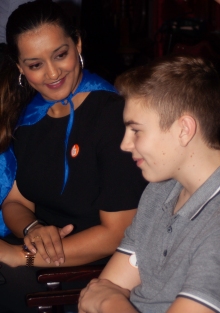 Councillor Salma Arif came to visit us and she is the Lead Member for Child Friendly Leeds. Councillor Arif came for our press call and photo shoot where we got dressed up in super hero costumes. She was great fun and enjoyed dressing up!

Our next visitor was Lucy from Leeds City Council’s Comms Team. Lucy is creating all the design work for our CFL Awards and she’ll be using all our ideas to create posters, invitations, a special team logo, and programmes for the night and certificates that are sent to everyone nominated. Lucy worked with us to create our own super hero character – we had to think about characteristics, features, clothing (like capes, head dresses, the colour of our outfits), a catchphrase, a superhero name, and what special super hero powers we would possess. We created these using a mixture of writing and drawings which were given to Lucy, along with a photo of us, so that she can create an individual super hero for each of us. This involves quite a lot of work – she brought along a couple of examples to show us and everyone thought they were really cool. A couple of people also started to work on a design for a logo for the Dynamics that could be featured on our super hero outfits. The next week she emailed through about half of the super heroes she had created and the faces of the super heroes looked really like the people they were based on. Each super hero Lucy designs will feature at some point on the marketing materials – maybe not all 13 on one marketing item as there won’t be space.

Our latest visitor was Lizi Patch, who is a script writer and artistic director of the City Varieties Youth Theatre. Lizi has worked with the CFL Awards Young People’s Planning group for the last five years and is very experienced in listening to their ideas and helping them to write a script based on their theme. Lizi will help us make our script appeal to a wide audience and for it to be humorous and for them to laugh and find it funny. The script might include jokes, puns and references to films.

Who is invited to the CFL Awards?

Attendance at the CFL Awards is by invitation only as the City Varieties can only seat just under 400 people. Therefore, we will be inviting the following people to the CFL Awards:

We want all our guests to enjoy the awards evening and enter into the spirit of the event by dressing up as super heroes – they can be well known famous super heroes or their own made up creation! It is going to be a fantastic night. Follow our progress here: https://www.leeds.gov.uk/childfriendlyleeds/cfl-awards/2019-cfl-awards and on Twitter (@Child_Leeds), Facebook and Instagram!

By Rebecca, a member of The Dynamics, the CFL Awards Young People’s Planning Team